Up until the 1700’s, almost all the world’s diamonds came from the Golconda region of India. Located in the Deccan plateau of South India, some of the largest, clearest and valuable diamonds found their way from this area and into the hands of kings and noblemen in Persia, Arabia and Europe.

Marco Polo in particular mentions how Indians went about harvesting diamonds long ago.
“This kingdom (India) produces diamonds. Let me tell you how they are got. You must know that in the kingdom there are many mountains in which the diamonds are found, as you will hear. When it rains the water rushes down through these mountains, scouring its way through mighty gorges and caverns. When the rain has stopped and the water has drained away, the men go in search of diamonds through these gorges from which the water has come, and they find plenty. In summer, when there is not a drop of water to be found, then diamonds can be found in plenty among these mountains. But the heat is so great that it is almost intolerable. Moreover the mountains are so infested with serpents of immense size and girth that men cannot go there without grave danger. But all the same they go there as best they can and find big stones of fine quality. Let me tell you further that these serpents are exceedingly venomous and noxious, so that men dare not venture into the caves where the serpents live. So they get diamonds by other means. (Polo, 1958:246).”

Even today, when the mines of Golconda no longer produce diamonds, and the center of the mining industry has shifted to South Africa, Russia and Canada, Golconda Diamonds have maintained their mystique and desirability. In fact, these diamonds are so difficult to find, that the great majority of jewelers and gemologists will never hold a Golconda diamond in their hands during their careers, and thus, the world’s remaining Golcondas  keep attracting higher prices.

One of the reasons for this is the history and legends attached to these stones. Here are three legendary stones from the Golconda mines: 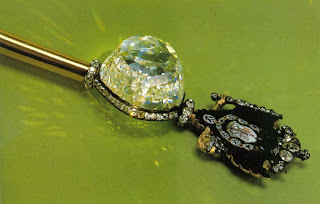 The Orlov Diamond: According to one account, the earliest known fact about the Orlov diamond is that it was set as one of the eyes of a Deity in a sacred temple in the south of India. A French soldier, who deserted and found employment in the neighborhood of Srirangam, learned that the temple contained the celebrated idol of a Hindu god, the eyes of which formed by two large diamonds of inestimable value.
According to the story, he made a plan to seize the diamonds, a feat which necessitated years rather than months of planning, since no Christian was ever admitted beyond the fourth of the seven enclosures. So in order to steal the diamonds, he embraced the Hindu faith and eventually obtained employment within the walls of the temple. By degrees he gained the confidence of the unsuspecting Brahmins and was allowed in as a frequent worshipper at the inner shrine (where the diamonds were located), because of his apparent veneration for this particular divinity. Ultimately, he secured the appointment of guardian to the innermost shrine within which lay the diamonds of his attention.
The Diamond passed through many hands and finally ended on the Sceptre of Queen Catherine the Great, and is now in the Kremlin.
The Hope Diamond 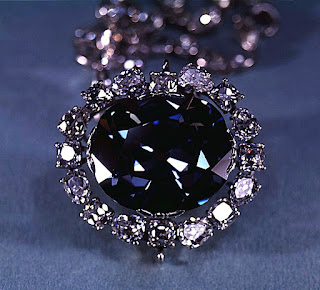 One of the most famous gems in human history, the Hope’s history is replete with wars, revolution, murder and greed. Purchased (or stolen) in 1666 by French gem merchant Jean-Baptiste Tavernier as the Tavernier Blue. The Tavernier Blue was cut and yielded the French Blue (Le bleu de France), which Tavernier sold to King Louis XIV in 1668. On September 11, 1792, while Louis XVI and his family were imprisoned in the Temple in the early stages of the Reign of Terror during the French Revolution, a group of thieves broke into the Royal Storehouse, and stole most of the Crown Jewels during a five-day looting spree. While many jewels were later recovered, including other pieces of the Order of the Golden Fleece, the French Blue was not among them and it disappeared from history. On 21 January 1793, Louis XVI was guillotined and Marie Antoinette was guillotined on 16 October of the same year. It was smuggled to Britain, and sold to American owners in 1911. It now is part of the collection of the Smithsonian. 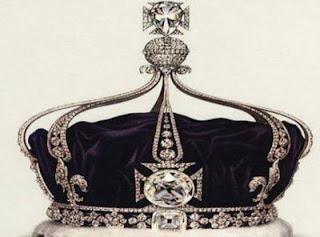 Reputed to be the Shyamantaka jewel, mentioned in Sanskrit texts, it has a very ancient history. In the early 14th century, Alauddin Khalji, second ruler of the Turkic Khalji dynasty of the Delhi Sultanate, and his army began looting the kingdoms of southern India. Malik Kafur, Khalji's general, made a successful raid on Warangal in 1310, when he possibly acquired the diamond.
It remained in the Khalji dynasty and later passed to the succeeding dynasties of the Delhi Sultanate, until it came into the possession of Babur, a Turco-Mongol warlord, who invaded India and established the Mughal Empire in 1526. Shah Jahan, the fifth Mughal emperor, had the stone placed into his ornate Peacock Throne. In 1658, his son and successor, Aurangzeb, confined the ailing emperor at nearby Agra Fort.
Following the 1739 invasion of Delhi by Nader Shah, the Afsharid Shah of Persia, the treasury of the Mughal Empire was looted by his army in an organised and thorough acquisition of the Mughal nobility's wealth.
After the assassination of Nader Shah in 1747 and the collapse of his empire, the stone came into the hands of one of his generals, Ahmad Shah Durrani, who later became the Emir of Afghanistan. One of Ahmed's descendants, Shah Shujah Durrani, formed an alliance with the United Kingdom to help defend against a possible invasion of Afghanistan by Russia. He was quickly overthrown by his predecessor, Mahmud Shah, but managed to flee with the diamond.

He went to Lahore, where the founder of the Sikh Empire, Maharaja Ranjit Singh, in return for his hospitality, insisted upon the gem being given to him, and he took possession of it in 1813. Its new owner, Maharaja Ranjit Singh, willed the diamond to the Hindu temple of Jagannath in Puri, in modern-day Odisha, India. However, after his death in 1839, his will was not executed. On 29 March 1849, following the conclusion of the Second Anglo-Sikh War, the Kingdom of Punjab was formally annexed to East India Company rule, and the Last Treaty of Lahore was signed, officially ceding the Koh-i-Noor to Queen Victoria and the Maharaja's other assets to the company. The manner of his aiding in the transfer of the diamond was criticized even by some of his contemporaries in Britain. It now adorns the Royal crown of England.
Posted by Mohan Ashtakala at 7:07 PM